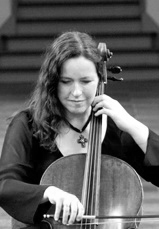 Cellist Ursula Smith is an established chamber musician who has collaborated with many *different musicians at festivals such as Cheltenham, Aldeburgh, Schleswig Holstein and Salzburg. She has worked with artists such as Pierre-Laurent Aimard, Steven Isserlis and Heinz Holliger. She was a Fulbright Scholar at Yale University. Her teachers include Ralph Kirshbaum, Aldo Parisot. She is currently a Professor of Cello at Guildhall School of Music and Drama in London.

From 2006 to 2012 Ursula was a member of the Zehetmair String Quartet. She played in many top venues including the Berlin Philharmonie, the Concertgebouw, Wigmore Hall and Carnegie Hall. As a soloist she has played with conductors such as Andrew Litton, Jorma Panula and Mark Wigglesworth, and gave the UK premiere of Nigel Osborne's cello concerto. She was Principal Cello of the Scottish Chamber Orchestra for a decade from 1993.