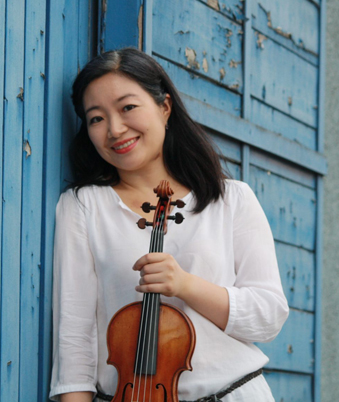 Versatile violinist Arisa Fujita is in great demand both as a soloist and as a chamber musician. Preceding her recent move to The Netherlands, she was a professor of violin at the Guildhall School of Music & Drama in London for nearly two decades.

Born in Japan, Arisa came to England in 1985 to study with David Takeno. After winning the Audi Junior Musician Competition in 1988, she entered the Guildhall School of Music and Drama in 1991. Whilst at the Guildhall, she won all the available violin prizes, including the Rose Bowl, Sheriff's Prize and a Silver Medal from the Worshipful Company of Musicians. Arisa was also a recipient of an Emily English Award, Maisie Lewis Young Artists Award and a Boise Foundation Scholarship.

Arisa has performed extensively worldwide as a soloist and as a member of the distinguished Fujita Piano Trio formed with her two sisters as well as the first violinist of the international prize-winning Gémeaux Quartett. Highlights include a tour of Italy, Morocco and Egypt organised by the Japan Foundation and numerous performances of the Beethoven Triple Concerto including a live TV and Radio broadcast with the Romanian National Radio Orchestra in Bucharest. Since their Wigmore Hall debut in 1999, the Trio has performed at major London venues and throughout the UK at more than 120 venues.

Arisa has collaborated with various artists including Joshua Bell, Martin Lovett, Murray Perahia, Alexander Rudin and Steven Isserlis, with whom she has performed on numerous occasions including at the Wigmore, Hall, Queen Elizabeth Hall, and in Japan, Austria, Ireland and in France. Arisa has been invited to the Open Chamber Music Seminar of the IMS Prussia Cove for many years and has also taken part in their national tour, which was broadcast on BBC Radio 3. Following the release to critical acclaim of a CD with chamber works by Toru Takemitsu on the ASV Label, Arisa has recorded Ysaÿe’s 6 Sonatas for Solo Violin, the Tchaikovsky Trio, Shostakovich/Ravel Trios, Schubert Trios, Dvorak“Dumky”/Smetana Piano Trios and Mendelssohn Trios all with Intim Musik Label. Arisa plays on a 1772 violin by G.B. Guadagnini, kindly loaned to her by a generous benefactor.