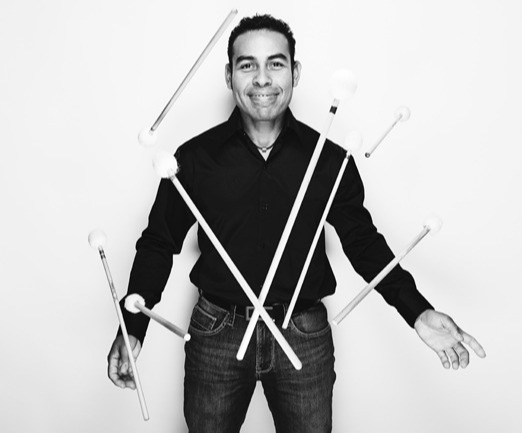 Christian Martinez commenced his percussion studies in his home town of Cali in Columbia. Later followed studies at the Manhattan School of Music in New York and at Rogaland Music Conservatory in Stavanger. In 1996 he graduated from the Royal Danish Academy of Music in Copenhagen, the same year he became a member of Esbjerg Ensemble.

Christian Martínez has participated as a chamber musician and soloist at several festivals and concerts in Scandinavia,Europe, USA, Latin America and Taiwan. Most recently at the Nordic Music Days Festival in 2010, Athelas New Music Festival in 2011, Percussion Plus Festival Aarhus in 2012 and Kalliokuninkala Festival in 2012 and Percussion Plusin 2014, both in Finland. In January 2014, Esbjerg Ensemble collaborated with “the king” of baritones, Omar Ebrahim, in the first Scandinavian performance of György Kurtágs, “Pas a pas, nulle-part” for baritone, string trio and percussion.

In the year 2010, Christian Martinez released his first soloCD “Rhythmical Séance” with Per Nørgård’s I Ching as well as pieces by Ivar Frounberg and Ejnar Kanding. The collaboration with Nørgård led to 2 new pieces included in this CD: a concerto for percussion and ensemble called Three Scenes as well as Arabesques I, II, III (2011) for solo percussion. Both pieces are dedicated to Christian Martínez and Esbjerg Ensemble.